Rites of Passage and Passing 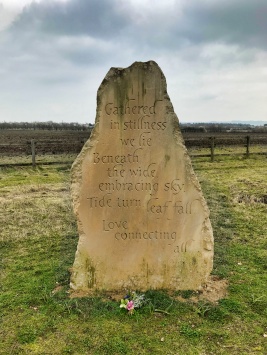 I lowered a lovely man into the earth today; an unexpected honour and not a little emotional.

Along with a few others, I carried his wicker coffin from the bier on which we had pulled him to his graveside, and gently ran the tapes through my hands as he was accepted back into the land he loved. People were come from all across the countryside, from all walks of life; often only really connected one to the other by the man in the ground. Airplanes dipped their wings overhead in salute. Really.

Grizzly was a bear of a man, as the size of the coffin confirmed, and wore the appellation well. I met him at pagan camps and Druid and Heathen gatherings up and down the country, but although we were friends we were always ‘going to sort out a meet-up’… That will have to wait now. More than a decade younger than I, he has been moved through into mystery far too early, the blessing of it being a brain haemorrhage that probably took him without him even knowing.

The bittersweetness of it too was meeting so many other friends for whom that same ‘we must arrange a get together one of these days’ suddenly gained a realisation that one of these days there would be no more days. A sobering way to prompt exchanges of diary dates and mobile numbers after the powerful and honest Heathen service was done.

His is a gentle and glowing soul, and I reflect that I missed many an opportunity in this life to share more time with him.

This post is taken from my daily journal at Blipfoto. Some of my daily whitterings are more important than others, and I would like to keep this one here.

2 responses to “Rites of Passage and Passing”