Music binds us together; always has, from the beat of the drum around the tribal fire to the choral symphony to the simple pop tune. When a part of that binding slips away it’s tough to reconcile. Last night I was raising a glass and listening to Roy Bailey, who departed into mystery yesterday afternoon.

There was no surprise. Roy’s departure had been flagged up as he entered a hospice with heart failure. Nonetheless, of the folk song genre, his was the voice that sang the strongest in my heart. Songs of dissent, of industrial rebellion and rights to life and freedom, of practical socialism, pacifism and simple joy.

His live performances, at least of the last three decades, twined in and out of our family as we heard him, and occasionally met him, at folk festivals and pub gigs. I recall the fondness our daughter had for his children’s songs and the fun we all had when aged about eight she boldly walked up to Roy during a late night gig full of slightly inebriated folkies and asked him to sing “Kangaroos like to hop!”. And he did.

His work with the late politician Tony Benn, “The writing on the wall”, was wonderful. The two sat side by side, Tony speaking on the history of the worker’s struggle, trade unionism and dissent, while Roy interspersed the monologue with songs that framed and accentuated the words. There’s an album of that, if you can find it. You can’t have mine. 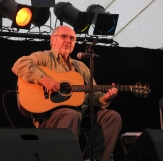 I’m slightly miffed at myself now that I can’t find the photo of me and Roy taken after a gig in very poor light, and which I probably didn’t in the end keep. Ah well. The shot here is mine from 2007 at Bromyard Folk Festival.

Roy didn’t write much, and sang songs by others. Janet preferred his “Beeswing” to Richard Thompson’s! There are two (at least two) of his songs – for he very much made them his songs – that will stay with me: Si Kahn’s “What you do with what you’ve got” is one. The chorus of which runs

And the other is Fred Small’s “Everything Possible”, that came to us at the perfect time and which should form part of every home with new children in it. I’ve linked to his 2018 version above, but here’s an earlier full version.

We live, we age, they age with us and often they pass into mystery. So many great voices, so many wonderful players. Professor Roy Bailey MBE (returned) was one. Blessed journey, Roy. Those whose names are remembered, live.

One thought on “Remembering Roy”