I’m not a civil engineer nor a highways engineer, but I’m sat in the middle of a village where we’re probably due to double in size in the next decade, and the main and only through road is historically narrow and crossed by a railway line with a blind bended hump backed bridge. Traffic is already an issue, with speeding motorists, practically zero police presence, and peak time congestion which is only going to get worse as all these hundreds of new rural commuters get into their cars.

As chairman of the parish council and of the village neighbourhood plan group I am put in the position of trying to second guess the “experts” from the developers and the local authority. The proposed expansion of the village, from a thousand houses to about two and a half thousand, is inevitably going to impact the viability of the main road as a safe and effective route for villagers and through traffic alike. The expansion is radical, and I suggest the solutions need to be radical too. This blog is of course personal opinion. 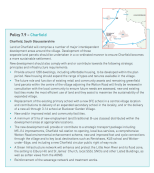 The Joint Spatial Plan (JSP) of the new West of England Combined Authority (WECA) encompassing South Gloucestershire, Bristol, North Somerset and Bath and North East Somerset (BANES) has stated in policy 7.9 that the Wotton Road (which links Gloucestershire to the M5 motorway at junction 14) should have a “comprehensive environmental enhancement scheme’, but nobody seems to know if that’s a new road surface or hanging baskets on the streetlights!

There is talk of reintroducing chicanes into this narrow highway, but twenty years ago these were tried and removed after serious congestion in Charfield impacted the whole region, and there’s more traffic now than twenty years ago. At the neighbourhood planning meetings we’ve discussed the viability of introducing roundabouts at all new road junctions with the Wotton Road, incorporating existing junctions where they fall adjacent. This would certainly slow traffic but would take away valuable green verges in favour of concrete and tarmac. Radical, radical… hmm…

Shared space is an interesting concept. Radical certainly. Opposed by some in areas where it’s been tested, particularly the blind but also other vulnerable groups who find sharing space with vehicles intimidating. But could it be finessed? Rather than putting up more and more street furniture and obstacles to the flow of traffic, simply to remove nearly all of them and lower the entire village speed to 20mph…

The issues of partially sighted persons failing to identify safe passage could be addressed through textured paths throughout what was previously pavement. Road surface normally assumed to be vehicular could be laid in red, which would both guide drivers and advise them of a potentially hazardous area. Pedestrian lights at the primary school would probably need to be retained, but all other road marking and signage could be removed. At the entrances to the village, something along the lines of 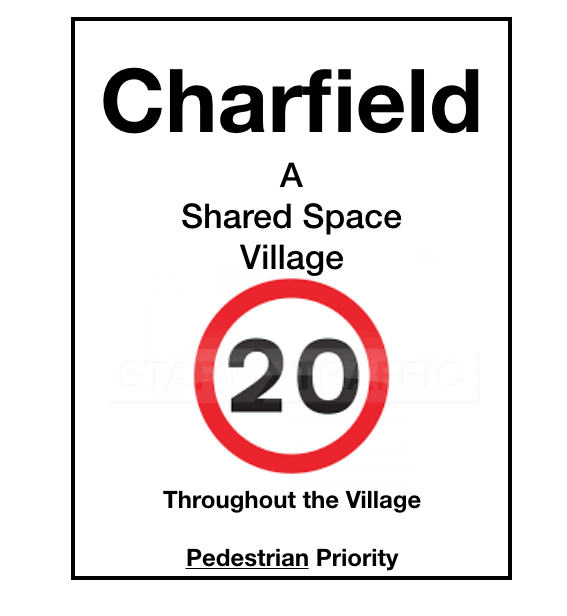 Allied with ANPR Average Speed Cameras through the Wotton Road this would potentially have the effect of enhancing the road for both pedestrians and powered road users alike. Traffic would flow, albeit more slowly, without halting at roundabouts or traffic lights (barring the school crossing). Congestion would likely decrease, or at least accumulate outside the village boundary on the B4058 and B4509, on country lanes.

Imagine a village where the traffic gently passed through, gave way to pedestrians, smiled rather than scowled at cars trying to pull out. Where children and the elderly felt safe to walk on the pavement, where currently 30mph HGVs suck them into the road as they pass… I don’t know nuffin… I’m an electrical engineer nor a road planner. But tell me why this wouldn’t work?

No, really, I’d be interested in hearing from you all. Have you tried this somewhere? How did that work for you? What are your fears, hopes, concerns… Am I the mad one, or the only sane man radical enough to suggest this? Hey, we were first in the county to turn out our streetlights at night, first to go fully LED lighting, now everyone does it. And if you’re wondering where we are, http://charfieldparishcouncil.org.uk/