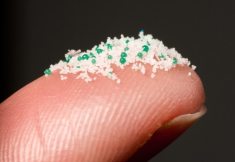 I attended a very interesting talk this week by Claudi Williams, a school teacher who became aware of plastic waste pollution when she became entangled in it while bathing in the Mediterranean. She determined to try to live without plastic products for a year and largely (with some caveats) succeeded. There’s a very good blog where you can get the details at www.pfree.co.uk

As is often the way with such presentations, it raised as many questions as answers. Specifically, in my mind, whether all plastic was the enemy. To live without any plastic use would seem unfeasible if not entirely impossible, and even Ms Williams found she was bringing new plastic into the house as well as using plastic purchased previously. And if we don’t use plastic, do we use wood? Metal? Or do without?

So, looking at it pragmatically, what is achievable? Plastic is out there now. Perhaps in the future we’ll engineer bacteria that feed off it as has been done with oil for when spills and contaminations have occurred. And we can certainly get rid of a lot of pointless plastic – single use bags, excessive packaging and wrapping and cosmetic micro plastics.

There’s an argument that micro beads and microfibres, though they now contaminate the entire planetary and and sea systems, are less damaging to creatures than such things as plastic bags, multi-tin collars and plastic shards from broken plastic and from breaking down plastic. These entrap or choke creatures whereas micro plastics potentially ‘only’ take up space in the stomach until expelled. However, eaten in excessive quantity, they prevent feeding and lead to starvation. So perhaps just as bad.

But how to change our habits. One example given in the talk was to turn away from plastic milk bottles and buy milk in glass bottles like once we did. Looking for a supplier though, we found not only was there the expected increase in price, but the transport miles were considerable. Locally it might be delivered by electric milk float, even powered by renewable generation, but the wider transport and the glass bottle production costs (how many times must we re-use that glass bottle?

And then the mind wanders. Micro beads, yes. How about tyre wear? When you look down and realise you need four new tyres, do you consider where all that rubber plastic polymer has gone? Micro particles of worn tyre must populate our world as much as plastic micro beads, released either into the air or into the adjacent soil, drains and watercourses. Once you start thinking about this stuff it’s everywhere.

It turns out that tyre wear accounts for up to ten percent of all oceanic plastic and a significant proportion of particulate matter in the air we breathe. We can ban cosmetic micro plastics, and take the beads out of the toothpaste… but who is dealing with tyre wear? Is it feasible to even address this aspect of micro plastic pollution? Yes, I know people who’ve chosen, bravely, not to drive. But they shop, they eat, and nearly all that too comes via transport. I wonder if anyone’s done a study of shoe sole erosion…

4 thoughts on “A wander through the micro beads”