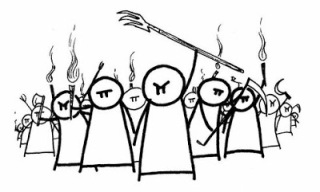 I didn’t have a vote yesterday in the Local Elections. If I had of had one, I would have voted – I always do, I feel it is a right hard won that should not be dishonoured by apathy. The next time I vote it may, I admit, be a deliberately spoiled ballot, but I will always vote while the option remains. Clearly I am in a minority…

While the various news media are having a fun-fest on how hard a thrashing the ConDem government got, and how wonderful the return of Labour… while the various politicians of all shades and colours fettle their positions to gain the best impression from those same media hacks… something is wrong in the state of democracy.

The turn out overall is something around 32% of the entitled electorate. In one constituency where a Facebook friend lives the turnout was under 19%! At a time such as this, when most are struggling in the face of Tory benificence toward the monied minority, it’s pretty clear that the majority have totally disengaged from the political process. Trouble is… what is left with which they can express their feelings?

I fear a mass of folk, who in the past would have shook their pitchforks and carried their lit torches up the narrow causeway to the castle of the local fuedal lordship, now have access to more modern means of proactive disagreement.

If our lords and masters fail to see how wrong this can go, well, it will make for something new for the media to report, eh?